The Geography of Peru

The development of civilizations in ancient Peru was encouraged by the productivity of the Peruvian seas, the valleys created by the rivers that flow down from the Andes Mountains, and the territory’s semi-tropical climate. Ancient Peruvians adapted to the extremely varied geography of the region with great ingenuity and creativity.

Peru is situated between the equator and the Tropic of Capricorn. Because it is in the tropics, one might expect Peru to be a country of lush vegetation and extreme heat. However, the Andes Mountains and the prevailing cold offshore ocean current give Peru very different geographical characteristics.

The Peruvian or Humboldt Current brings the cold waters rich in plankton from the South Pole to the Peruvian coast. Upon exposure to tropical sunshine the plankton is warmed and rises to the surface. The process of photosynthesis is accelerated near the surface and the phytoplankton’s nutritional value is increased. This produces the basis of a food chain which makes the seas off the coast of Peru the most fertile in the world.

The El Niño Current from the Central Pacific arrives off the coast of Peru from the north. Every 20 years or so this mass of warm water grows and displaces the cold Peruvian Current. This leads to significant changes in climate. In dry regions like the Peruvian coast torrential rains are produced, while in the highlands there is drought. The productivity of the Peruvian seas is reduced dramatically.

Coast: The coastal belt is a desert crossed by fertile valleys. It borders a very fertile ocean from which its ancient inhabitants were able to obtain a permanent food supply. They built the first towns in this region because it was a good place to live. They abandoned their nomadic lifestyles and developed agriculture in the valleys.

Highlands: In the Andes Mountains many rivers cut a path through the high peaks. Some of them flow into the Pacific Ocean, while others make their way to the Amazon basin. The valleys which are formed are used for agriculture. The great altitudinal range enables the cultivation of a variety of crops. This territory is very rich in minerals.

Forest: This region has the greatest biological diversity on the planet. In ancient times it was a sparsely inhabited territory occupied by different ethnic groups which utilized the resources of the Amazon basin and had occasional contact with ancient Andean states through trade. 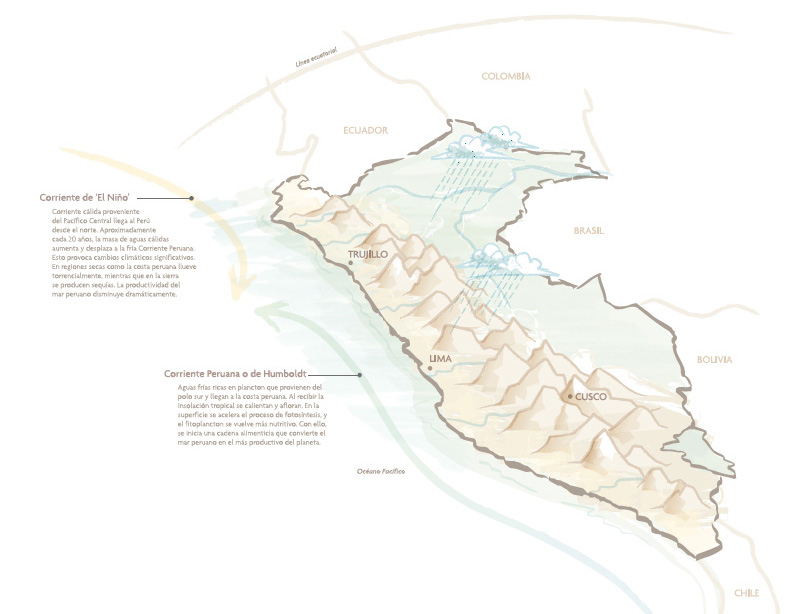